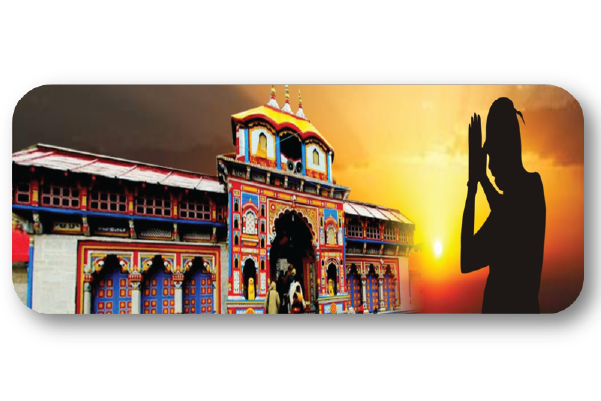 Haridwar: Haridwar is situated at a height of 310mts(1,030 ft) from the sea level, between Shivalik Hills in the North and Northeast and the Ganges River. Haridwar is set along the banks of the pious river Ganga, Haridwar is an ancient city and is regarded as one of the seven holiest places to Hindus. Here you will find many Hindu temples, some built years and years ago and some that were built in recent times. The city also hosts the famous Kumbh Mela which is celebrated after every 12 years, where millions of pilgrims, devotees, and tourists gather in Haridwar to perform ritualistic bathing on the banks of the river Ganga. The Ganga Aarti held every evening at HarkiPauri is a must watch for tourists visiting Haridwar. Some of the most visited temples in this sacred city are Mansa Devi temple, Chandi Devi temple, Shantikunj, Daksheshwar Mahadev & Pawan Dham.

After Breakfast check out from the hotel & Drive to Guptkashi view Devpriyag and Rudrapriyagon the way. Later in the evening check into the Hotel & Overnight stay.

Guptakashi:-Guptkashi It is located on the route to Kedarnath on a ridge on the west side of the Mandakini river valley at an elevation of 1,319 mts above sea level. The main temple of Guptkashi is dedicated to Lord Shiva as Vishwanath – “Lord of the Universe”. It is built by regional stones and is situated in an enclosed courtyard. The small temple to its left is Ardhanarishvar. Guptkashi is situated on the mountain facing Ukhimath town. When the Pandavas were searching for a glimpse of Shiva, Shiva first concealed himself in GuptKashi but later fled from them further up the valley to Kedarnath. Guptakashi a religiously important town of Uttarakhand as it houses ancient temples like Vishwanath temple and Ardhnarishwar temple.

Early in the Morning start your journey for Gaurikund and from there either take Horse or trek to Kedarnath. Enjoy KedarnathDarshan& back your hotel. Overnight stay at Kedarnath.

By Helicopter: Morning our driver will transfer you your prebook Helipad.

By Trek:Today wake up early in the morning around 4 am & Start your Journey towards Kedarnath Temple. In the afternoon check into the hotel/Camp in Kedarnath, After fresh n up visit temple & Have darshan of Lord shiva 12 Jyotriling. Later visit Bhairav Temple which is just above the Kedarnath temple. Later back to hotel & overnight stay.

Kedarnath: The temple was built by Pandavas and revived by AdiSankarachary and is one of the twelve Jyotirlingas, the holiest Hindu shrines of Shiva. In 2000 BC, AdiShankaracharya came to Kedarnath with 4 of his disciples. However he preferred to go the final 14 kilometers alone to Kedarnath temple from GauriKund hot springs , which he created for his shivering disciples. Kedarnath temple Shiva lingam is pyramid shaped and hence is unique among Shiva temples.Apart from that, Kedarnath is a part of the char dham pilgrimage sites in Uttarakhand. Situated at an altitude of 11,755 ft

Kedarnath Weather – Due to its high altitude the weather in Kedarnath remains cold for most part of the year. Summer here is cool and pleasant while winter is severe. During summer season the temperature varies around 20°Celsius. Light woolen wear is recommended. Winter season in Kedarnath is severe with mercury falling to as low as 0°Celsius. During this time the place experiences snowfall as well. Due to the extreme climatic conditions, this time is usually avoided by tourists.

Today wake up &After fresh up in the morning visit the temple for Morning Aarti, later have breakfast, check out from the hotel & transfer to Guptkashi. In the evening check into the hotel & Overnight stay.

By Helicopter: Morning our driver will transfer you your pre book Helipad. After Back our car will drop you at the Hotel for rest.

By Trek: You have to come by trek till Gaurikund then take a local jeep for Sonprayag where your Driver will wait. There is a big parking issue so the driver will back another palace if his contact no. is not working then you have to arrange another taxi or wait for your driver & send the message to any other driver.

Post breakfast transfer from Guptkashi to Badrinath, check into the hotel later visit Taptakunda take a dip into the hot water, have the Darshan of BadrivishalAarti in evening. Brahma Kapal is significant for PinddanShraddh of ancestors (Pitrus). There are other interesting sightseeing spots like Mana, VyasGufa, Mata Murti, Charanpaduka, Bhimkund and the “Mukh” of the Saraswati River. Just within the three kms of BadrinathJi. Overnight stay at Badrinath.

Badrinath was re-established as a major pilgrimage site by AdiShankara in the 8th century. Char Dhams is one of the most celebrated pilgrimage sites of the country and is situated at an elevation of 3,133 meters, guarded on either side by the two mountain ranges known as Nar & Narayan with the towering Neelkanth Peak providing a splendid backdrop. Badri refers to a berry that was apparently said to grow abundantly in the area, and nath means “Lord” / “Lord of” as per the context in which it is referred. Badri is also the Sanskrit name for the Indian Jujube tree, which has an edible berry. Some scriptural references refer to Jujube trees being abundant in Badrinath.

TaptKund : Natural thermal springs on the bank of the river Alaknanda, where it is customary to bath before entering the Badrinath temple.

ManaVillage : Inhabited by an Indo-Mongolian tribe, it is the last Indian village before Tibet.

Vasundhara : As the name suggests, vasundhara is a magnificent waterfall. This place is 5 kms. from Badrinath out of which 2 kms is motorable up toMana.

BhimPul : On the other side of Mana village, a massive rock forming a natural bridge, lies over the roaring Saraswati river. It presents a spectacular view of water thundering down through the narrow passage under the rock and is believed to have been placed there by Bhim, the second eldest among the five Pandava brothers.

VyasGufa (cave): Near Mana Village, this is a rock-cave where VedVyas is believed to have composed the Mahabharata and the pauranic commentaries.

Badrinath Weather: The average maximum temperature will be around 18° Celsius and the average minimum is 8° Celsius. Warm and woolen clothes are hence required for a stay in Badrinath throughout the year. Winter in Badrinath is often accompanied by snow falls. Winter is very chilly with an average temperature of 5° Celsius. Due to the extreme climatic conditions, this time is usually closed for tourists.

Post breakfast visit Mana Village in the morning, which is very famous for Last tea Shop, Vasundara Fall, BhimPul, Vyasgufa&Saraswati river. After sightseeing drive to Rudraprayag view Narsingh Temple in Joshimath. In the evening check into the hotel & Overnight stay.

Joshimath is situated on the slopes above the confluence of the rivers Alaknanda and Dhauliganga. Of the four ‘Mathas’ established by AdiShankaracharya, Joshimath is the winter seat of Badrinath. The idol is brought down to Joshimath and installed in the temple for people to worship. This is an ancient temple of Lord Vishnu in Narsingh Avtar and the main temple of Joshimath. It has an idol of Lord Narsingh, which is considered established by Shankaracharya. As per local belief, the right hand of this idol has become as thin as hair. On the day when it will break, the mountains Jay-Vijay (which are situated on a way to Badrinath) shall join and become one and Lord Badrinath of Badrinath temple will disappear from the present temple and re-appear as black stone (Shaligram) at new place called BhavishyaBadri, which is situated at a distance of 10 km from Joshimath. During the period when Badrinath temple remains closed during winter every year, an idol of Lord Badri is brought to Narsingh temple and worshiped for six months.

Rudraprayag:- An ancient shrine is dedicated to Lord Shiva in the form of ‘Rudra’. Rudraprayag is of immense significance for the pilgrims of Char DhamYatra, as it is the junction for visiting Badrinath and KedarnathDham. Rudraprayag Is one of the PanchPrayag (five confluences) of Alaknanda River. It is the confluence of rivers Alaknanda and Mandakini. Kedarnath, a Hindu holy town is located 86 km from Rudraprayag.

Rudraprayag Weather – Generally hot in summer, the temperature ranges from 35-40 degree Celsius, Winter: The Days are pleasantly cool but the nights are cold, temp ranges from 20 deg to 05 deg.

After breakfast transfer from Rudraprayag to Haridwar view Dhari Devi temple, Devpriyag & Rishikesh on the way later Check into the hotel in Haridwar & Overnight stay.

Rishikesh: Named after the Lord Vishnu, Rishikesh is a holy city for Hindus. Located in the foothills of the Himalaya in northern India it is also known as the yoga centre of the world and is home to many

world renowned ashrams. Rishikesh styles itself as the ‘Yoga Capital of the World’, Hindu sages and saints have visited Rishikesh since ancient times to meditate in search of higher knowledge.The fast-flowing Ganges is surrounded by forested hills inside the city. Apart from the spiritual and yogic teachings the town is also famous for adventure activities like White Water Rafting and Kayaking in the mighty Ganga, Bungee Jumping, Camping, Mountain Biking, Rock Climbing and Zip Lining.

About Helicopter in Kedarnath:

Thank you for choose us serving our services